The natural world is full of oddities. From the largest creatures to the smallest microbes, the Earth is full of extraordinary animals, people and things. This principle was no different during the time of the dinosaurs, when the world was populated with weird and wonderful creatures. In a series of articles over the next few months, I will share my top picks for the most peculiar dinosaurs known to science and talk about what exactly made them so odd….

In the field of paleontology, China is the gift that keeps on giving. Ever since the late 1990’s, thousands of fossils have been unearthed every year, all of which have helped to shed new light on dinosaur diversity and evolution. These discoveries have unearthed a large array of new species, some of which are amongst the most spectacularly odd dinosaurs known to science. In my next few articles, I will discuss my choices for the most peculiar of these Chinese dinosaurs, starting with a small dinosaur that lived like a turtle.

The story of our dinosaur began in 2001. Paleontologists led by Xu Xing described a new species of Ankylosaur from the Yixian formation of China’s Liaoning province. They named the creature Liaoningosaurus paradoxus, due to the animal’s unclear phylogeny (family tree) amongst Ankylosaurids. Upon initial discovery, the diminutive size (34 centimeters) relative to other Ankylosaurids, and because most of the skeleton had unfused joints and bones, led paleontologists to believe the specimen was that of a juvenile. This presumption also helped to explain some of the other odd bodily features present on Liaoningosaurus, such as elongated limbs and feet, sharp claws and unusually sharp teeth.

Even though the original fossil was believed to be an intriguing first look at juvenile Ankylosaurids, the fossil received little press coverage. While the fossil was an important discovery to paleontology, it didn’t exactly stand out in the same way a new specimen of Tyrannosaurus does, and as such seemed to be destined to become one of many dinosaur obscurities. Then, 15 years later and seemingly out of nowhere, a second specimen was discovered. While the two specimens are remarkably similar to one another, the second had one key detail preserved: its stomach contents.

For over a century all species of Ornithischian dinosaur were considered to be herbivorous in nature. This group consists of Dinosaurs such as Stegosaurus, Pachycephalosaurus, Iguanodon, and Triceratops. That changed with the discovery of the second Liaoningosaurus fossil, as within its gut lay the fossil bones of an ancient fish. Due to the state of the bones it was determined that Liaoningosaurus had ate and digested this fish, as opposed to the notion that the fossils happened to be buried on top of each other. This small detail forced paleontologists to not only re-examine Liaoningosaurus as an individual species, but also other small ornithischians alike. 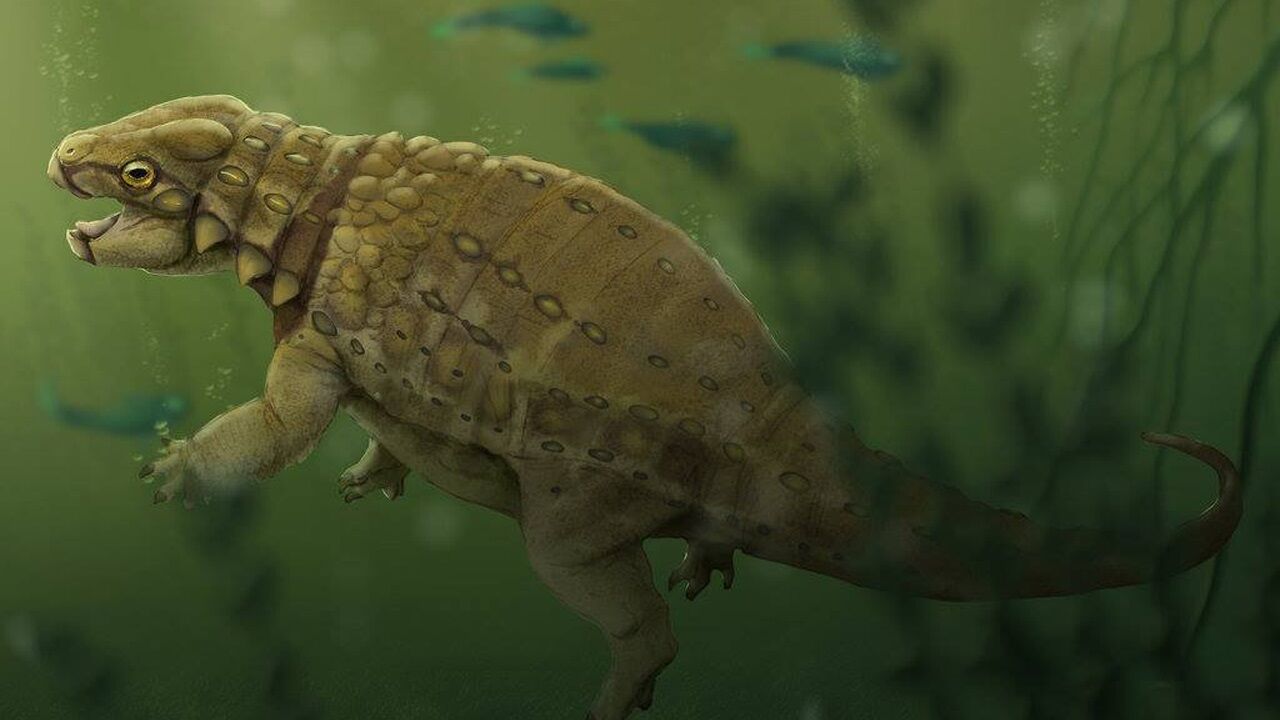 The pescatarian diet helped to explain some of the odd body features present on Liaoningosaurus. The sharp teeth were no longer considered to be the trait of a juvenile dinosaur, but rather an adaptation used for hunting fish. The long hind limbs and feet were now associated as a mechanism for effective swimming, allowing Liaoningosaurus to effectively propel itself in aquatic habitats. The theory of an aquatic dinosaur also helped to explain the unfused joints, as many different kinds of marine animals share this special adaptation. Based on the evidence, it would seem as though Liaoningosaurus was an aquatic dinosaur, more similar in nature to a turtle than to other dinosaurs.

The predatory nature of Liaoningosaurus has also sparked a debate about the diets of other small Ornithischians. Did other small dinosaurs eat meat as well? It certainly seems possible, as most small animals alive today possess an omnivorous diet. Some herbivores, such as the Pachycephalosaurids, possessed unusually sharp teeth at the front of their jaws. It has been theorized that these teeth may have been used to dispatch small prey. While this theory may be inconclusive, what remains certain is that the discovery of Liaoningosaurus has shed a new light on the potential for a carnivorous diet amongst Ornithischian dinosaurs.

Amongst dinosaurs, Liaoningosaurus is unique. To this day it remains as the only confirmed case of predatory behavior amongst Ornithischian dinosaurs, as well as one of the only known aquatic dinosaurs. While it is truly a spectacular case of filling an ecological niche, there are other dinosaurs that may just trump it in just how odd they are.

All facts within this article are sourced by: